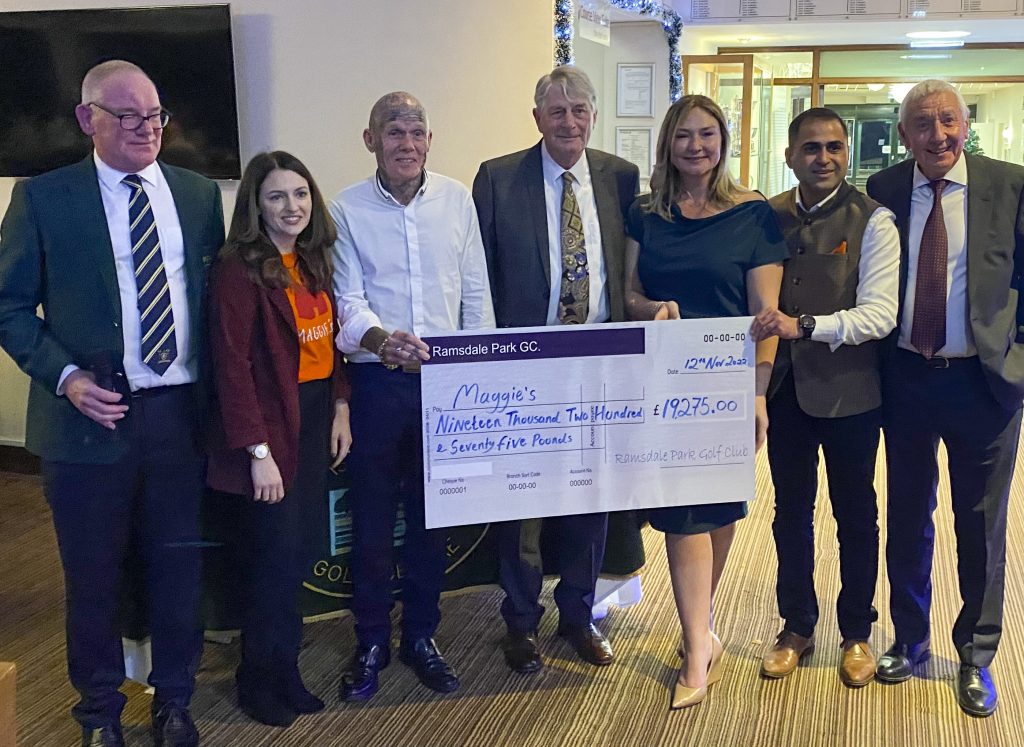 Calverton, Nottingham – 15th November 2022 – Located in the Calverton area of Nottingham, Ramsdale Park Golf Centre has smashed its record for the amount of money raised for the captain’s charity in a single year, with close to £20,000 presented to Maggie’s Cancer Care.

This incredible sum was accrued at various events throughout the year, as well as via season-long fundraising initiatives. The most significant portion was raised during the annual Captain’s Charity Day, this year held on Saturday 6th August. 180 members and guests teed it up in a team style competition. The bulk of the money raised on the day was generated by the sponsorship of holes, competition entries, a raffle, and an evening auction. A variety of prizes were kindly donated by members, local businesses, and other golf clubs in the area.

“We are thrilled to have raised a record amount of money for our wonderful captain’s charity, Maggie’s. This fantastic feat would not have been possible without the help of all staff, members, and volunteers, who have each played a crucial role.”

Further fundraising initiatives included the club’s Senior Section sponsoring ‘hole-in-one’ prizes in support of the Charity Day, raising in excess of £1,000. An additional £500 was raised through donations and unclaimed prize vouchers, while the Ramsdale Park Ladies Section bought in a total of £1,220 via the Lady Captain’s Charity Day in June, among other events.

“The entire membership here at Ramsdale Park have been absolutely phenomenal in their efforts to raise as much money as possible this year for Maggie’s Cancer Care. In particular, our Club President, Danny Harkin, who has led the fundraising efforts and been instrumental to the total raised.

“As a central part of the community, we are all delighted to have broken our fundraising record yet again, allowing us to give back even more to a charity that does so much for people across the country.”

Ramsdale Park Golf Centre has been raising money for local charities since the mid-1990s, and since the introduction of an annual charity event in 2004, the club has raised a whopping £250,000 to support a number of incredible local causes.

The club hosted a presentation evening on Saturday 12th November, during which a cheque for £19,275 was handed to representatives of Maggie’s Cancer Care. Further funds will be contributed right the way through to Christmas.

In addition to the money raised for main club charity, Maggie’s Cancer Care, the Ramsdale Park Par-3 Club raised a further £1,500 in support of the Eye Care Health Organisation (ECHO).  The Par-3 Club, made up of close to 100 members and visiting golfers, meet every Tuesday to play on the Lee Course. Throughout the year, they have run numerous club events that have helped them raise this substantial amount.