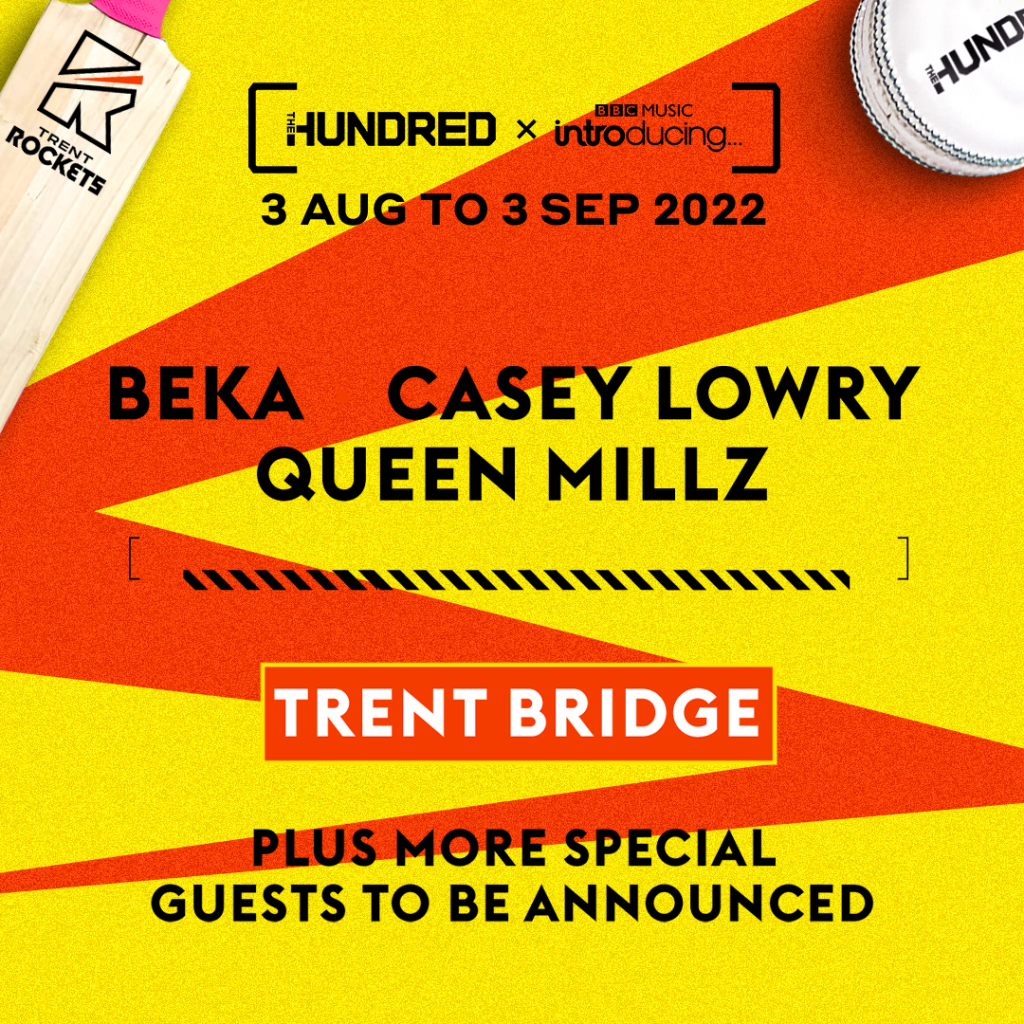 Nottingham will once again play host to a number of rising music stars as part of The Hundred’s entertainment programme.

Announced today, the line-up sees Trent Bridge set to host to some of the most exciting names on the UK music scene including BEKA on 17 August, Casey Lowry on 20 August and Queen Millz on 29 August.

Nottingham-based artist BEKA enjoyed a breakout 2020 with her single ‘I’ll Be There’ and has recently released her latest EP called ‘Your Skin’.

Meanwhile, Casey Lowry and Queen Millz gained popularity by sharing their music on TikTok, before releasing their own EPs.

Across the country, the billing is topped by four-times platinum selling English pop-rock band Bastille, who will take to the stage at The Hundred men’s and women’s final at Lord’s on Saturday 3 September.

For the second year running, the live music at all 34 games of The Hundred has been curated in collaboration with BBC Music Introducing.

As well as the performances taking place at Trent Bridge other artists will perform in front of large audiences at some of the UK’s biggest cricket grounds, including Lord’s (London), The Kia Oval (London), Edgbaston (Birmingham), Emirates Old Trafford (Manchester), Sophia Gardens (Cardiff), Headingley (Leeds) and the Ageas Bowl (Southampton).

BEKA, who will perform at Trent Bridge in Nottingham on 17 August, said:

“The Hundred’s line-up last year had so many of my absolute favourites.

“I’m honoured to be a part of such a slaying line-up of artists this year.

“Playing in front of your home crowd is unlike any other experience so I already know this moment is going to be a wild and a definite 2022 highlight.”

In its first year in 2021, The Hundred attracted some of the biggest names in UK music including Becky Hill, Everything Everything, and Self Esteem, plus breakthrough acts such as Sports Team and Lauran Hibberd.

More information on The Hundred’s 2022 music line-up is available at www.thehundred.com/music/live-acts, where fans will also be able to receive updates on additional artists confirmed for this summer’s competition in the coming weeks.

The confirmed list of artists and where they will be performing are as follows: