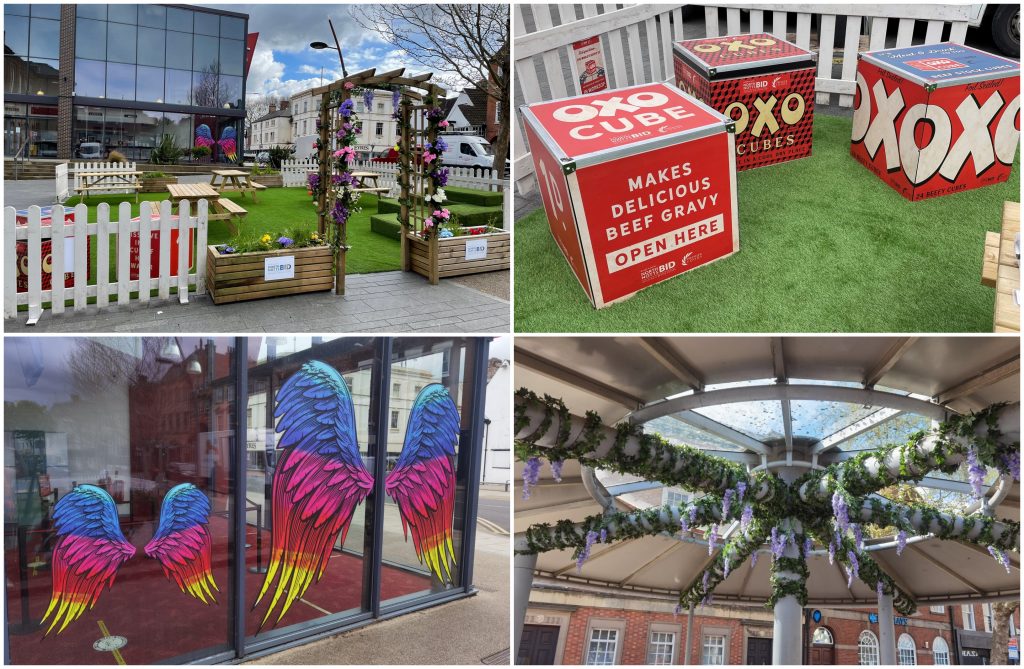 HIGH STREETS across North Nottinghamshire are being transformed by eye-catching street decorations to encourage people to eat and shop locally as restrictions begin to ease.

The initiative, which is being delivered by North Notts BID in partnership with leading supplier of placemaking decorations City Dressing, includes the rollout of artistic pop-up installations and vibrant seating areas across town centres in Retford and Worksop.

Along Carolgate in Retford, two new seating areas have been adorned with planters and cycle-themed decorations are soon to be suspended above the high street. These will pay homage to the town’s cycle shops, Retford and District Wheelers Cycling Club and highlight the town’s enthusiasm for cycling over time – shown through the support for the Tour of Britain when it visited Retford in 2018.

The town centre’s large bus shelter – better known as ‘the mushroom’ – has also undergone a transformation after being covered in decorative flowers.

Sally Gillborn, chief executive of North Notts BID, said: “We’re delighted to have introduced these fun street dressings to public hotspots across North Nottinghamshire and we hope they will help the district to feel reinvigorated after a difficult year by encouraging people to return to the high street in support of local businesses.”

In Worksop, picture-worthy angel wings have been placed outside the Savoy cinema, with plans for an assortment of flowers and butterfly decorations on catenary wires to line the path along Bridge Street. Across the town square, a pop-up park has also been installed – featuring grass, a picket fence and an archway – complete with five vintage Oxo-themed seats in recognition of the global production of Oxo cubes by Premier Foods in Worksop.

Sally continued: “The inclusion of the Oxo-themed seats celebrates a significant part of the town’s history and is a fantastic representation of business enterprise in the region. We are grateful to Premier Foods for kindly providing these seats, which also tie in nicely with the North Notts FoodFest that is being held in Worksop on 03 July 2021.

“Alongside our upcoming events – such as the BookBench Trail, Party in the Square and the FoodFest – we are confident that this vibrant array of dressings and seating areas will help to drive footfall to town centres, celebrating everything that makes the North Nottinghamshire community so great and fundamentally generating custom for local businesses.”

“We pride ourselves on bringing social value to communities across the country – something that has never been more important after the past year – and what better way to facilitate this than by creating these fantastic installations for local people to enjoy with their friends and family.”