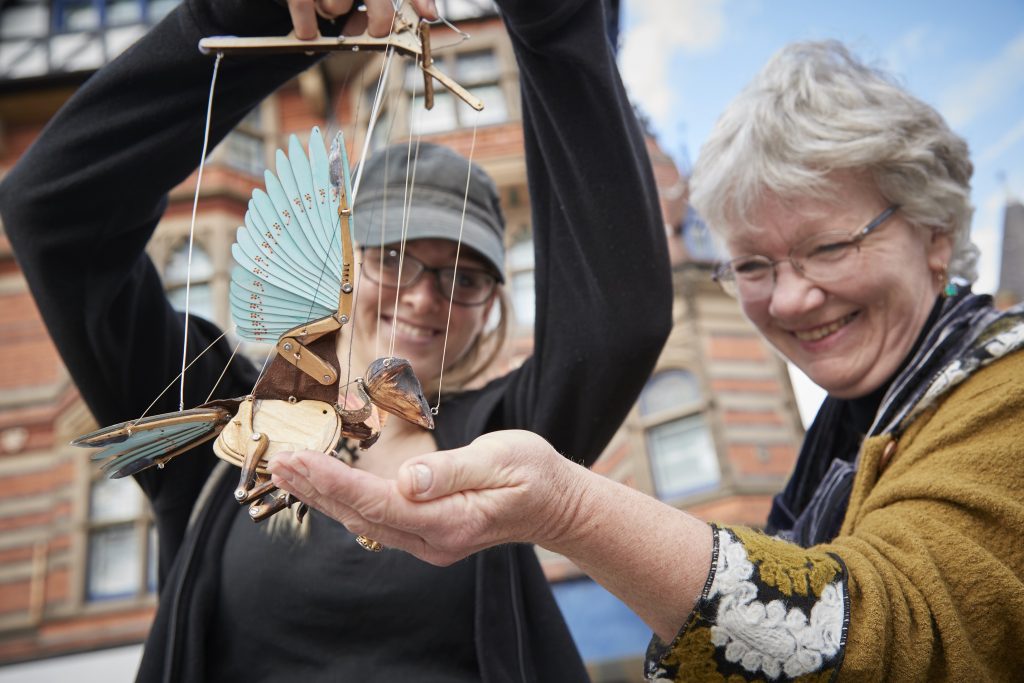 Nottingham Puppet Festival to return to the city in 2020

Following the success of the first Nottingham Puppet Festival in 2018, the Theatre Royal & Royal Concert Hall, in partnership with City Arts and Nottingham Trent University, has announced a follow-up festival in May 2020 featuring puppetry walkabouts, workshops and performances across the city.

Starting on Saturday 16 May and running over four weeks, Nottingham’s second Puppet Festival promises to deliver another exciting and fun programme of puppetry, including shows, events, talks, screenings and workshops for all ages.

The full festival programme will be launched at the beginning of April. Highlights will include puppet walkabouts at Old Market Square, a unique combination of hip-hop and puppetry at Breakin’ Convention at the Royal Concert Hall, plus puppetry talks and a national puppetry symposium at Nottingham Trent University. City Arts will produce a new outdoor show featuring festival mascot Maid Marionette and there will be bursaries available to support local artists to create new work. The festival programme will feature visits from some very famous TV puppets and the return of the infamous late-night puppet cabaret at the Theatre Royal.

Giant outdoor musical spectacular, JINGAH!, will be the centrepiece event of the festival taking place on the weekend of Saturday 6 and Sunday 7 June at Old Market Square. JINGAH! will feature a cast of world class performers and larger than life-size puppets, with acrobatic musicians and singers from around the globe.  This environmentally-themed production, supported by Arts Council England, is a new show written by Berlin-based musicians Duncan Townsend & Chloé Charody.

“We were overwhelmed with the response to the first Puppet Festival in 2018, which saw over 23,000 people engage with the festival over four exhilarating days.  We have now widened the festival, linking up with some of the other exciting events that Nottingham has to offer, such as the Spiegeltent in Old Market Square and Lakeside’s Wheee! Festival.  Our Puppet Festival in 2020 will now really establish itself as a major Nottingham event and is a shining example of how so many venues and organisations can work together across the city.”

“City Arts is delighted to once again be at the heart of this amazing festival with our partners Theatre Royal & Royal Concert Hall and Nottingham Trent University. The 2020 programme explores puppetry in its many forms and celebrates how accessible, playful and joyous it can be. Along with our network of partners who support the festival, we look forward to bringing outdoor spectacle that is accessible for all, alongside new ideas, artist commissions, shows, workshops and talks to the communities of Nottingham.”

“Nottingham Trent University is excited to partner City Arts and the Theatre Royal & Royal Concert Hall for the second Nottingham Puppet Festival in 2020. As well as being fundamentally enjoyable, puppetry is a great way of breaking down barriers and engaging us all in themed events that help to shape lives and society. The university is looking forward to hosting a performance event and a symposium, and many of our staff and students will be involved in volunteering and placements opportunities, helping us to connect with many people and schools in our wonderful city.”

The Nottingham Puppet Festival 2020 is funded by Arts Council England, and further supported by funds from NTU and City Arts.