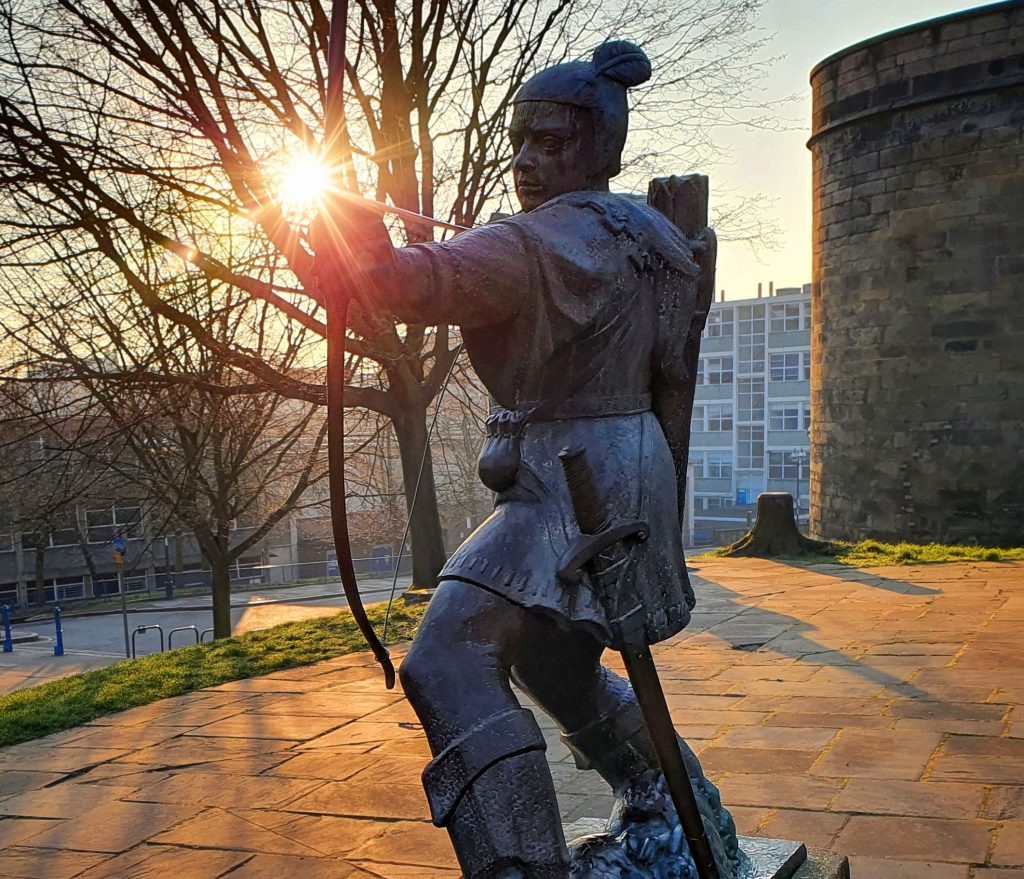 On Sunday 24th July 2022, it was 70 years ago that the Robin Hood Statue was first unveiled to the public in a spectacle of flag waving and band playing and so the internet-based World Wide Robin Hood Society carried out a random survey with some of the many visitors who turned up to take a selfie with the iconic Nottingham landmark.

“Between 11.15am – 12.45pm, I spoke to visitors from Wakefield; Cheshire; Boston and Virginia USA, Romania; Italy; Durham; The Wirrall; Washington DC; Colchester; Mansfield; New Mexico; Spain; Saddleworth; Australia; Bristol; Estonia and The Phillipines. There were numerous families of all ages, along with students, organised travel groups and individual tourists and locals. It was impossible to speak to everyone and I estimated that for everybody I did manage to speak to, twice as many had taken their pictures and moved away! Very few were aware that it was the Statue’s 70th Anniversary but when I briefly explained the background, they were excited to be there and take a selfie/photo on such an historic day.”

Steve Bradwell and his friend Ira were authors and activists from the USA and so they took a topical picture of the statue draped with the Ukrainian flag, epitomising Robin Hood’s role as perhaps the ultimate People’s Freedom Fighter. Perhaps the most unusual photo sent in was from local resident, Brendan Minihane which showed his vintage Humber Supersnipe motor in a selfie in front of the Statue reflecting other Nottingham icons on the windscreen!

“It was encouraging to see that, even after 800 years, the Robin Hood legend still has the pulling power as an international, globally recognised “brand.” It continues to attract significant numbers of visitors to the City and give its residents a sense of pride.”

It was the Nottingham Evening Post journalist, the late Emrys Bryson, who summed it up best when he said, “Robin Hood, you see, is one of the most valuable pieces of property that Nottingham has. A public relations man’s dream handed to the city on a plate!”

Then, back in 1977, the year of the Queen’s Silver Jubilee, when the Statue was also 25 years old, Mr Bryson remarked

“There were no bands, bonfires or fireworks but there he was, larger than life , your friend and mine …. the one who, if it came to a worldwide poll , is known even more widely than the Queen. That unique but neglected trademark for Nottingham – Robin Hood; who celebrated his “jubilationless” Jubilee very quietly!”