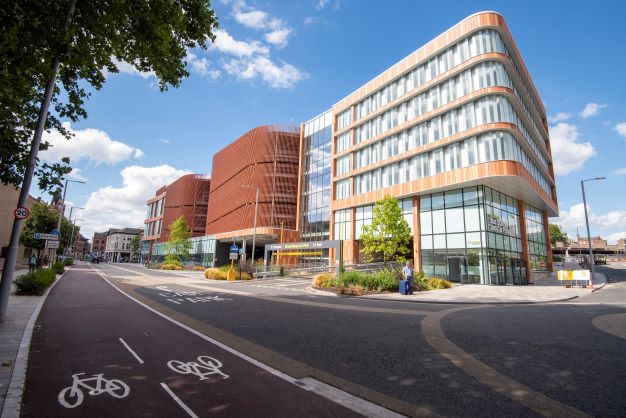 Work continues to reshape the streets around Broad Marsh

The transformation of streets around the Broad Marsh area to complement new developments is continuing, with the resurfacing of Middle Hill scheduled to take place this month.

Huge improvements have already been carried out, funded from a successful bid to the Government for Transforming Cities funding. Around £20m has been allocated to create a fresh new gateway to the south of the city, by removing or reducing traffic in the area and developing new pedestrian-friendly spaces for people to enjoy.

The section of Canal Street alongside the new Broad Marsh Car Park and Bus Station has been freshly surfaced, with finishing touches being made to a segregated cycle lane linking to the well-established Castle Boulevard cycle lane. Access to this section is limited to buses, taxis and bikes, helping to reduce the barrier for people walking between the station and the city centre.

Once across Canal Street, pedestrians now enter a wide, traffic-free section of Carrington Street with new paving, benches, planting and trees, along with heritage-led improvements to building frontages. There is easy access to the new Car Park and Bus Station, with steps and level access to the new Central Library which is currently being fitted out. Some finishing works remain, while the pedestrian tunnel through the former shopping centre site will be replaced this month with an open walkway with windows in hoardings for people to watch progress as the Broad Marsh vision takes shape.

Pedestrians crossing Canal Street near Trent Street now take a route towards Nottingham Contemporary along Sussex Street, passing the new Nottingham College through a pleasant area with new planters, trees, benches and tables and stepped areas for further seating, with some works still underway. Previously ugly scrubland, the area is being further brightened by colourful murals on the columns of the tram viaduct – with a skate friendly space planned near the City of Caves entrance.

The other route into the city centre up Middle Hill is also having work carried out, including new paving and road resurfacing. The resurfacing work will require a series of overnight closures of Middle Hill between Canal Street and Weekday Cross, starting on Monday 12th September and finishing on Sunday 18th September. Closures will be in place between 9pm and 4am.  During the closure periods, buses will continue to serve the city centre on all routes, diverting along Canal Street, Bellar Gate and Cranbrook Street to re-join Lower Parliament Street. General traffic diversions will be in place using routes along Canal Street, Hollowstone and Weekday Cross to access the Lace Market Area, and Warser Gate, Stoney Street and Barker Gate to exit the area.

The next piece of public realm improvement work will see Collin Street – formerly a traffic-choked six-lane road – turned into a pedestrianised plaza with more planting and seating, linking to the Sussex Street area via new amphitheatre-style steps currently under construction. Collin Street will then be linked via the ‘green heart’ element of the reimagined Broad Marsh site to Listergate and the city centre beyond.

City Council Leader, Cllr David Mellen, said: “We’re continuing to make good progress with some really transformative work on the streets around the Broad Marsh area. This used to be an unwelcoming gateway to the city from the south, and while there is still a lot to do, already our improvements have reduced barriers and the dominance of traffic and created pleasant spaces where people can linger and enjoy the surroundings.

“Work continues up Middle Hill, requiring some overnight road closures and then we will turn our attention to linking that area with a reimagined Collin Street plaza, which in turn will literally pave the way for the vision of the shopping centre site to take shape.”