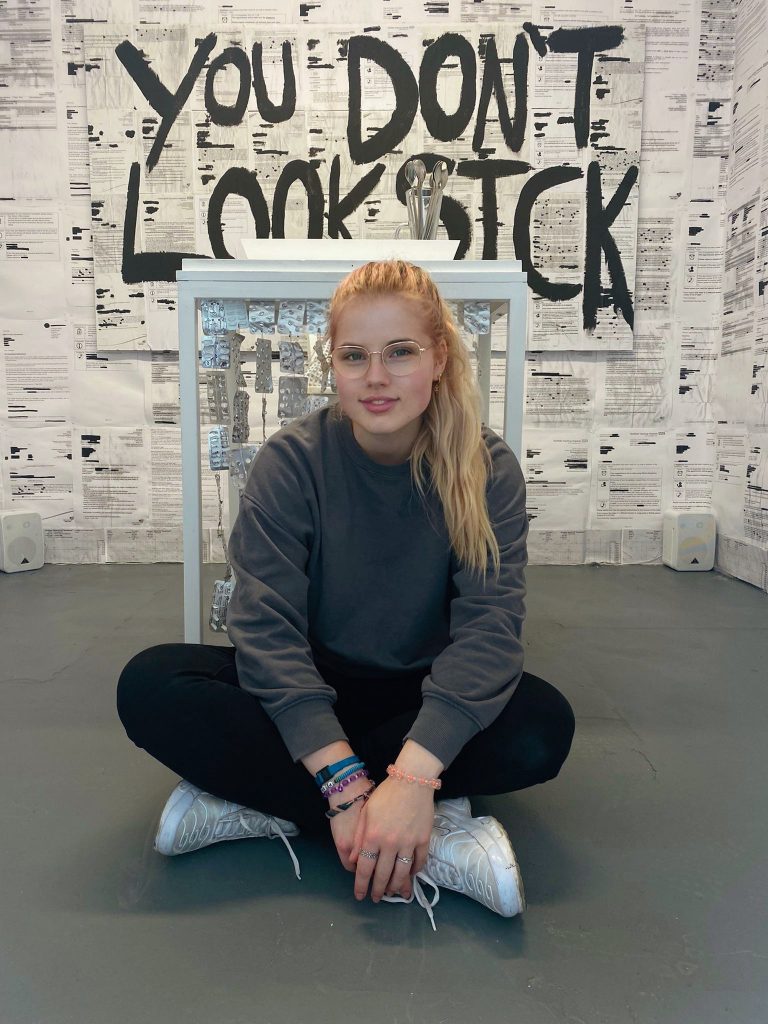 Artwork sends a powerful message about living with a hidden disability

A student has created a series of art pieces to increase awareness and reduce stigma around hidden disabilities.

Chloe Burns, 22, says that prior to her diagnosis doctors and others around her did not believe that there was anything wrong with her.

“At one point I was passing out up to five times a day and I was constantly in and out of hospital, however I was struggling to get heard and specialists and others around me were doubting the awful symptoms I was experiencing,” said Chloe, from Ipswich town centre, who is studying BA Fine Art at Nottingham Trent University.

“My experience led me to create a series of artworks that would challenge perceptions and increase awareness around hidden disabilities.”

After a long and difficult time seeing doctors and specialists, Chloe was diagnosed with multiple conditions including Postural Tachycardia Syndrome, which is often referred to as PoTS.

PoTS is an abnormal increase in heart rate that can occur after standing or sitting. Symptoms include fainting and dizziness and, due to the condition, Chloe experienced passing out on many occasions.

Before her experiences with PoTS, Chloe was an avid dancer and dance teacher and this informed her early art practice. She would dance across paint on canvas but as her condition worsened she was forced to change her practice.

As part of her final year work, Chloe created “You don’t look sick” from 48 pieces of paper which were taken from copies of her medical notes and appointment information. These acted as the canvas on which she would paint the name of the piece in capital letters in bold, black ink.

The artwork went viral on Facebook, receiving more than 2,000 shares and thousands of comments, as well as being shared on the Grayson Perry art page.

Chloe did not realise the community for hidden disabilities was as big as it was and received hundreds of messages of support in response to her artwork.

She went on to create a further piece of art titled “Is it just in my head” in the same style as her previous piece, but this time words were painted on top of a canvas of her electrocardiogram (ECG) scans.

Her second piece was inspired by the experience of others doubting what she was feeling and going through, which in turn led her to doubt herself and her illness journey too.

Chloe, of the Nottingham School of Art & Design, said:

“I hope that my work helps people to understand more about hidden disabilities and the struggles of those who have them. I want the art to make people think before they make snap judgements and to challenge the negative attitudes there are around disabilities that might not be immediately apparent.”

“Chloe has demonstrated how to document her experiences and challenges while channelling them through a creative, research-based process. Her art practice has not only challenged perceptions around hidden disabilities, it has also resonated strongly with people who live with disabilities, just like Chloe.”