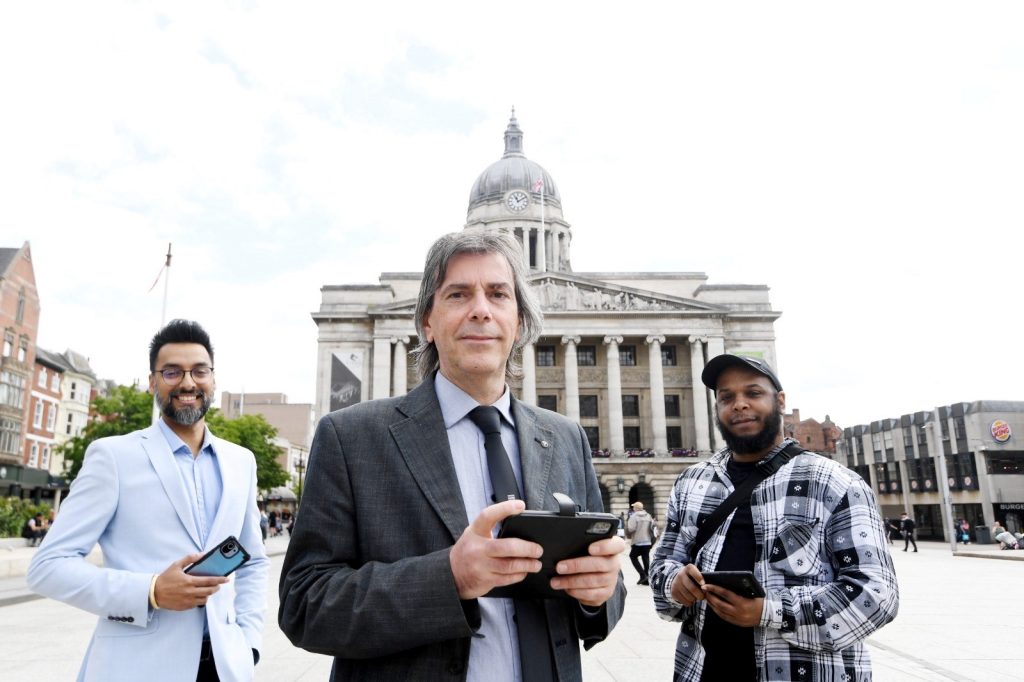 Historic Market Wall brought back to life in augmented reality

A historic wall which divided Nottingham’s Old Market Square for 700 years has been recreated for the public to see in an augmented reality app.

Nottingham Trent University and Confetti Institute of Creative Technologies have digitally recreated the historic Market Wall – which stood between 1068 and 1727 – so visitors to the square can see how it once looked and interact with it virtually.

The Market Wall – which is said in documents to have been ‘breast height’ – was built to define the French Norman borough on the south-west, and the Anglo-Saxon borough on the north-east.

The two boroughs had different laws, sheriffs and administrations, and although the wall divided the two spaces physically, it had several openings and pedestrians were able to pass between the areas freely.

The app – which will initially be available to download on android devices only – includes the reproduction of a Ducking Stool located near the existing water fountains, and a reconstruction of the older Malt Cross, located at the corner of the former Debenhams building.

The Malt Cross was historically used for public announcements, while the Ducking Stool was used to punish people – mainly women for having illegitimate children or prostitution – by bonding them to a chair and immersing them in dirty water, sometimes resulting in death.

Some resources have suggested that the wall was built as a robbed stone wall, with stones taken from various sources, but an archaeological dig undertaken when the square was recently repaved discovered remnants of a brick wall, probably a repaired or renewed section of the stone wall. The augmented reality version was based on this information.

“The Market Wall is a fascinating and less well known part of Nottingham’s heritage, as many documents which could have detailed the history of Nottingham  were destroyed by fire many centuries ago.

“This app will provide people with the chance to learn more about the Market Wall, the Ducking Stool and the Malt Cross, and how Nottingham was in fact a dual city for hundreds of years with French and Anglo-Saxons living side-by-side.

“We hope to build on this pilot project and develop the research for the creation of a ‘city museum of intangible heritage’ featuring various other forms of augmented reality which bring Nottingham’s rich history and heritage to virtual life.”

The researchers are keen to expand the research to make the app compatible with iOS devices.

“This has been an exciting project to work on in terms of reliving what it would’ve been like to walk around and through the historic Market Wall. The power of new technology such as augmented reality and virtual reality allows people to relive historic experiences in a way they could not have before.”

“We have been experiencing an emergence of augmented and virtual reality technologies some years now. Since the inception of this project, we pushed to find a great way to capture a part of Nottingham’s heritage in a way that was both innovative and accessible. We look forward to continuing this research to support the growth of a library of augmented heritage sites and museums, and show the people of Nottingham and its visitors its rich history.”

“It’s great to see NTU bringing Nottingham’s fascinating history to life using new augmented reality technology. Many parts of the city’s previously hidden and lost historical sites can be brought back to life, hundreds of years after they’ve gone away which is amazing.

“This new technology has the potential to enhance visitor experience and help locals with a keen interest in history. It’s also testament to the phenomenal work going on at NTU who continue to push the boundaries of what’s possible.

“Visit Nottinghamshire are proud to be supporting the project as well as the academics at our two universities. Copies of Dr Moneta’s literature about the project can be found at the Nottingham Tourism and Travel Centre.

“We’re incredibly lucky to have them flying the flag for our city and I’m looking forward to seeing what other hidden parts of Nottingham’s rich history it can bring to life next.”

For more details about the project and to download the AR App please visit the website: www.nottinghamwall.com