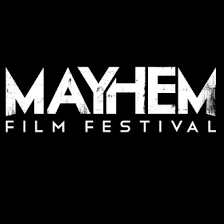 Mayhem Film Festival to return to Broadway, Nottingham on 14-17 October 2021

Mayhem Film Festival will return this autumn to showcase the best in international horror, sci-fi and cult cinema, with the festival’s 17th edition planned to run for four days from 14-17 October.

After last year hosting a slimmed-down ‘Skeleton Edition’ of the festival due to restrictions caused by the pandemic, organisers are hoping to move back towards the full flesh of the festival’s traditional form for this year’s edition, though the precise structure of the festival will remain responsive to events and any restrictions which may be in place in the autumn.

“We are very much hoping to return to a full festival at our home venue of Broadway in Nottingham, because nothing beats the full experience, but we are aware things are still evolving. Our main priority is for everyone, audiences and staff, to enjoy films in a safe environment so we’re encouraging you to save the dates, but don’t make plans to travel just yet. We’ll continue to work with our friends at Broadway and follow government guidance in the next few months and hope to announce our exact plans in the early summer”, says the team.

On the festival’s return, Broadway’s Marketing Director Stewart Terry says: “We’re so excited to host Mayhem once again and we hope to do so in all its gory glory. The festival always brings people together at Broadway and we can’t wait for them to not only enjoy some of the most exciting films from across the world, but also experience our refurbed venue.”

In addition to announcing their 2021 dates, Mayhem Film Festival is also excited to open their call for short films for this year’s edition. Over the years, Mayhem grew from a single short film programme to a four-day event, but its shorts programme remains at the heart of every edition. Mayhem Film Festival are looking for horror, sci-fi and cult short films, produced after 1 January 2020 and that are under 22-minute long. More information on how to submit films is available at https://filmfreeway.com/MayhemFilmFestival

In previous years, Mayhem has welcomed many filmmakers from around the world such as Gareth Edwards (Godzilla, Rogue One: A Star Wars Story) for Monsters, Mark Gatiss (The League of Gentlemen, Sherlock) for a special masterclass, Ben Wheatley for a preview screening of Sightseers, Nicolas Roeg for a special screening of Don’t Look Now at St Mary’s Church in Nottingham, and cult Canadian collective, Astron-6 for The Editor and The Void. Mayhem Film Festival has also hosted special events such as screenings with specially-commissioned live scores from 8MM Orchestra, two exclusive live stage reading of unmade Hammer Films screenplays, The Unquenchable Thirst of Dracula in 2015 and Zeppelin V. Pterodactyls in 2017, and a live performance of Tales of HP Lovecraft by The Duke St Workshop featuring British actor Laurence R. Harvey.