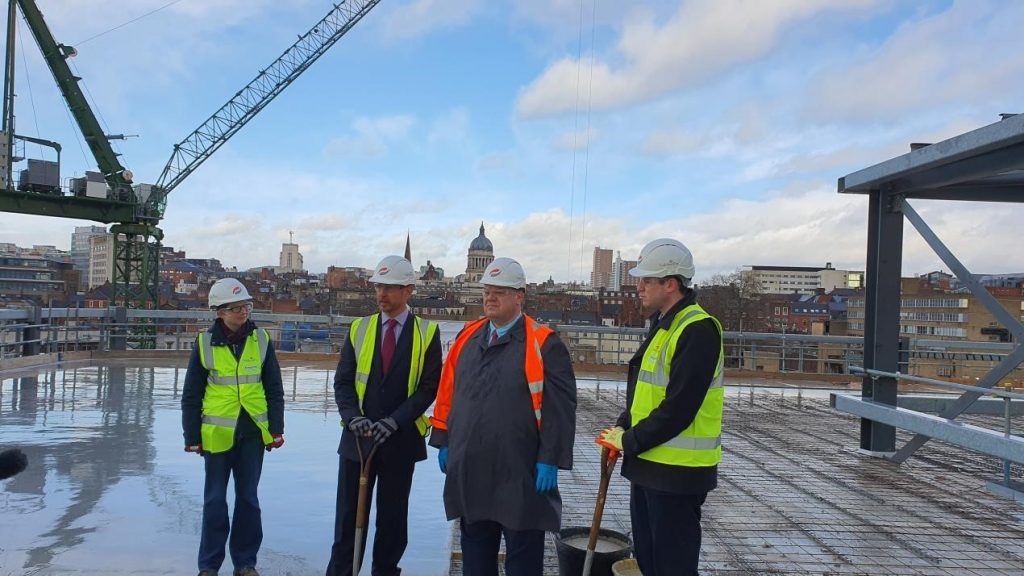 Redevelopment of the Broadmarsh area took another step forward today (Tuesday 18 February) as a formal ‘topping out’ ceremony took place on top of the six storey structure of the new Broadmarsh Car Park, Bus Station and Central Library development.

Representatives from Nottingham City Council the D2N2 Local Enterprise Partnership and contractors Galliford Try met onsite to mark a key construction milestone on the site that has reached its full height. Work on the new development will continue until early 2021 when the bus station and car park are expected to open. The new library will follow later in the year.

Councillor David Mellen, Leader of the City Council, said: “This time last year this site was empty, work had only just begun on intu Broadmarsh and only a couple of bits of steel were out of the ground at the City Hub. Now there is major demolition work at intu Broadmarsh, the College is scheduled to open in September and like many in Nottingham I’ve been pleasantly surprised at the speed at which this development has emerged from the ground.

“With the scale of this new building, people are really starting to get a sense of the ambitions we have for Nottingham. Providing a new Car Park and Bus Station will bring more people to this exciting new area, especially families who will have leisure facilities like bowling and the cinema at intu Broadmarsh and the best children’s library in the country at the new Central Library.

“Our redevelopment of this area is giving confidence to private investors too, with HMRC’s new tax offices at Unity Square progressing at pace and with ground having been broken on the Island Site last week. It’s an exciting time for Nottingham – I know some thought Broadmarsh might never happen, but it’s become a reality now as the area changes before people’s eyes.”

David Williams, Deputy Chair of D2N2 Local Enterprise Partnership, said: “We’re pleased to see the progress the Broadmarsh development has made in recent months, culminating with this topping out ceremony.”

“The Broadmarsh development, in combination with other investments D2N2 has made, such as Nottingham College’s City Hub and the redevelopment of Nottingham Castle, will help shape the city for many years to come by attracting the private investment already being felt, and improving the lives of city residents as Nottingham becomes a better place to live, work, and learn.”

Jon Marston, Managing Director of Galliford Try Building East Midlands, said: “Topping out ceremonies are always a moment to take stock in a project and we are delighted with the progress we have been able to make so far at Broadmarsh. Central to that has been our excellent relationships with all the stakeholders, and the Council in particular, and that collaborative effort will drive us on now to complete what will be a fantastic facility for the people of Nottingham.”