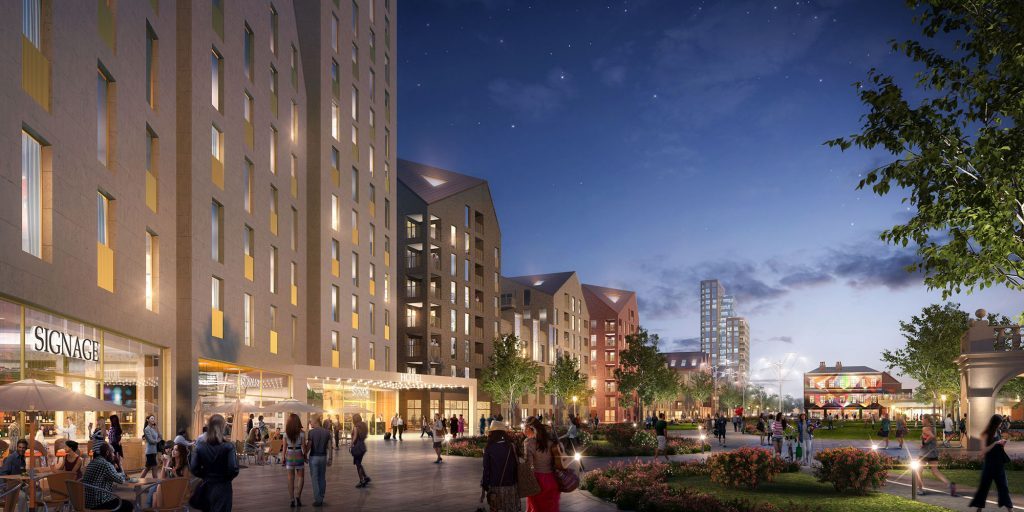 Plans to transform the former Boots Island site have taken a step forward as the developer behind the scheme begins work to clear the site.

Conygar received outline planning permission for the major development in April 2019 and work is now starting to prepare the site, which will be transformed as part of the regeneration of the southern side of the city.

The development will be re-named ‘The Island Quarter’, and will comprise new homes, grade A office space, creative market space, a five-star hotel, retail units, a ‘linear’ park and community space and student accommodation.

Robert Ware of Conygar said: “Being on site to start clearing ahead of this huge development is a symbolic step and shows the progress that has been made so far. We are pleased to be bringing this new chapter to Nottingham and we are looking forward to the next phase of the works.

“Nottingham is a vibrant and creative city where several exciting developments are taking place and our plans for the site are a key part of this regeneration. We believe this is a unique development which will help to elevate Nottingham’s position, not just in the Midlands but also the UK.

“We wanted the name of the site to reflect both its history and its ambitions. The area has been known as the Island since the 1800s, and the introduction of ‘Quarter’ illustrates the scope of the project.”

The site, which sits between Manvers Street at the bottom of Sneinton and London Road, has been derelict since 1994.

Representatives of Nottingham City Council, Invest in Nottingham as well as those who are working on the clearance were on site on 10 February to mark the start of the works, alongside an electric excavator provided by JCB.

Robert added: “We’re very conscious of the impact construction sites can have on the environment, and we want to ensure that the way we do things on site supports Nottingham’s commitment to meet become the first carbon neutral UK city by 2028.”

Cllr David Mellen, leader of Nottingham City Council, said: “The new Island Quarter will be a major asset to Nottingham, connecting nearby neighbourhoods to the city centre through an area long overdue for redevelopment.

“Breaking ground here today shows that this is a city on the up. Not many places have the opportunity to create a new addition to their city like this, with 40 acres of land prime for redevelopment so close to the city centre.

“The plans to provide a mix of places to live, work and play will perfectly complement the other redevelopments across the Southside area – at Broadmarsh, at Unity Square, in the Meadows and at Nottingham Castle. We’re pleased to be working with Conygar on creating this new space for our city and like many others, I look forward to watching it change before us.”

“The development is set to continue the new era for Nottingham and we hope it can be a catalyst for further investment and growth. It’s great to see the site finally brought back in to use.”

The landmark development will create hundreds of jobs, strengthen the local economy and help to elevate Nottingham as one of the UK’s key regional cities for investors and employers. Construction work is expected to start on site later this year.