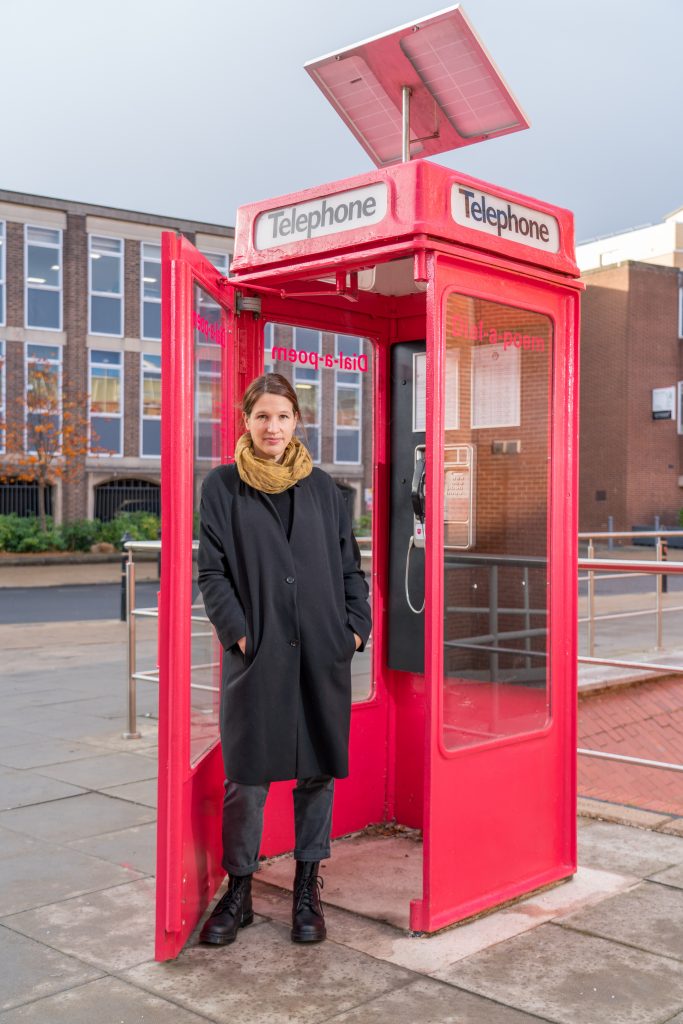 A heritage phone booth which invites users to listen to poetry down the line has been installed in Nottingham city centre thanks to a research project which celebrates the unique relationship between the telephone and literature.

Nottingham Trent University has restored a Kiosk No. 8 and placed it on Shakespeare Street – outside the Bonington Gallery on the city campus – to allow passers-by to stop and dial a selection of 63 contemporary poems from around the world.

The installation is part of a wider £175,000 Arts and Humanities Research Council-funded project which will culminate in a book that explores the relationship between language, technology, literature and the telephone.

Led by Dr Sarah Jackson, Crossed Lines: Literature and Telephony examines the ways that the phone has been conceived by writers from the 19th century to the present day.

Engaging diverse groups – including writers, artists, musicians, scientists, and members of the public – the research has incorporated a number of activities including a mobile app, an online symposium, a crowdsourced exhibition, artistic commissions and writing workshops with refugees.

The project celebrates the life of the late poet and performance artist John Giorno, who founded Dial-A-Poem in the 1960s in New York, which became a global phenomenon, connecting millions of listeners worldwide to poetry via the phone.

Dr Sarah Jackson, of the School of Arts and Humanities, said: “Exploring the relationship between literature and the telephone, the research thinks through the possibilities of calling, communication and technology within contemporary cultures and communities.

“The telephone has the capacity to facilitate – but also to limit – connections across times, places and cultures, and in the context of a global pandemic, this project investigates the role of the telephone in our attempts to stay connected.

“The installation of the K8 phone booth invites the public to engage with some of this research through a material object. Designed by Bruce Martin in 1967, this model is often cited as the last of British Telecom’s great red telephone boxes. Although there were originally 11,000 installed, very few remain today, so we’re lucky to have the booth at NTU!

“Those who enter the booth will hear poetry read aloud by the authors and translators, and are invited to think about how we talk, text and listen across borders.”

‘The Booth’ was originally located at NTU’s Brackenhurst campus but was removed during redevelopment of the site and renovated, before being painted in NTU’s magenta pink.

Barbara Matthews, Executive Dean for Culture at Nottingham Trent University, said: “The Booth is one of many ways in which we are enriching  life in Nottingham.

“We look forward to using The Booth to exhibit future staff and student work, showcasing their creative skills to the wider public and, in doing so, putting smiles onto people’s faces and inspiring a new generation to express themselves creatively.”