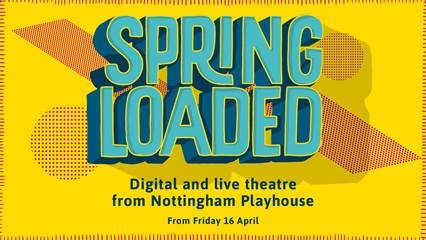 Nottingham Playhouse has revealed over 20 events that will be available online in a new season of live and digital programming, aptly named Spring Loaded.

Nottingham Playhouse has announced a season of live and digital productions that celebrate local stories and support East Midlands’ talent. The shows and events range from dance, music, drama, and Bollywood to horror, comedy and romance. Most the productions will be available to rent for On Demand viewing over five days, with others livestreamed. Prices start from just a small suggested donation to its Curtain Up appeal, to £20 per household. Bookings for live events will go on general sale on Tuesday 23 March. On Demand productions will steadily become available for rental from 16 March 2021 through to June 2021.

Stephanie Sirr, Chief Executive for Nottingham Playhouse, said: “We’re just so pleased to be able to showcase so much brilliant local talent at a time when there have been so few chances for them to shine.”

Still Life: Untold Stories from Nottingham Now is a brand new collection of short films telling the tales of the city we love, through the eyes of residents who sometimes pass unnoticed. Conceived and commissioned by Nottingham Playhouse, and shot on location around the city, Still Life will pair a group of writers with a member of Nottingham’s communities. Using conversations with these individuals as a starting point, the writers will each create a short piece that sheds light on the previously unexplored stories of how we live now.

And now internationally renowned and critically acclaimed writer Alan Bennett (Talking Heads, Lady in the Van, The History Boys and The Madness of George III) has joined the project with a specially-written vignette.

Adam Penford, Artistic Director at Nottingham Playhouse, said: “The pandemic has changed the way we live and Still Life will capture this moment in time, revealing some of the lesser-known stories of the people of Nottingham in 2021. They are part of our on-going commitment to nurture the immense talent in the region, and provide some much-needed employment to freelancers, including writers and actors, many of whom have had little government support since last March. I’m delighted that Alan Bennett has also penned a short ‘bonus track’, as our audiences loved his The Madness of George III a couple of years ago.”

The play LIT will also be newly reimagined and specially filmed for the screen andwill be available on demand. This follows rave reviews during its tour in summer 2019 with Nottingham Playhouse and HighTide Theatre. The play explores the turbulent teenage years of a Nottingham girl looking for love in all the wrong places. It places complex, working-class people at the heart of the production, and is inspired by writer Sophie Ellerby’s experience working with young women and mothers in the prison system.

Suba Das, Artistic Director & Chief Executive and Rowan Rutter, Executive Director at HighTide said: ‘We’re delighted that this reimagined version of LIT allows us and Nottingham Playhouse to bring Sophie Ellerby’s extraordinary voice to an even wider audience, allowing us to share this play with those who otherwise might not have been able to attend in person, especially young people in marginalised communities.’

Described as a ‘blistering debut’ by the Guardian and awarded five stars by Broadway World, actress Eve Austin was also nominated for a Broadway World Award for her performance as Bex.

Oh for F*ck’s Sake (I’m in Love with You) is an audio play by Northamptonshire writer Samson Hawkins – winner of the 2020 Take Off Award for New Writing – and produced by In Good Company, Nottingham Playhouse and Arena Wolverhampton. It is a post-apocalyptic comedy set in year 2099 where Alex and Robin fall in love in a world post freedom, democracy and hope – meaning they have to decide whether to fight their robot overlords or run for their lives.

The play – starring the voices of Shaofan Wilson and Ben Norris, and directed by Craig Gilbert – will be available on Nottingham Playhouse’s website for a small suggested donation.

Meanwhile, armed with just himself and a chair, Lewis Doherty (creator of WOLF) presents a live streamed performance of BOAR – a fantasy adventure set in a distant kingdom where pirates, bounty hunters and thieves do battle. BOAR is the second instalment of Doherty’s BEAST Trilogy, and is co-produced with The North Wall Arts Centre and BEASTHOUSE. BOAR will be performed with a live in-person audience as well as being livestreamed. Lewis will also host a free Q&A after the event.

Joining this collection of new productions is comedic romp Bring On the Bollywood, a Bollywood dance-theatre extravaganza inspired by classic Indian cinema that also revels in the shared dramatic heritage between the UK and India. Bring On the Bollywood was created by Phizzical Productions in 2017, directed by its Artistic Director Samir Bhamra and funded by Arts Council England’s Strategic Touring Grant. This particular production is available to rent for a small suggested donation to Nottingham Playhouse’s Curtain Up appeal.

In addition to the new On Demand productions there will also be a rehearsed reading of Private Peaceful and a panel discussion and excerpts from First Touch which will be livestreamed. Both are productions that would have originally been produced in 2020, but have since been moved as a result of the pandemic.

Based on the beloved children’s book by Michael Morpurgo, this adaptation of Private Peaceful is a new ensemble-version by Simon Reade. It follows the adventures of Peaceful brothers, Tommo and Charlie – starting with their childhood adventures in rural England. However, things take a turn as both brothers fall for the same girl just as the Great War begins – with devastating events unfolding as a result. It will be directed by Elle While and feature the original company of actors.

First Touch is new play commissioned by Nottingham Playhouse that tackles the footballing world’s child sex abuse scandal. It tells the story of Clayton, a 17 year-old Nottingham lad who has been offered a contract at a First Division football club. Set during an era of racism, hooliganism and Thatcher’s administration, his dual-heritage family hope Clayton’s success will hold some relief. However, when his former coach suddenly re-enters his life, Clayton is forced to confront his past.

First Touch is written by Nathaniel Price (Tin Star, Sky and Noughts and Crosses, BBC) and directed by Jeff James (Noah and the Peacock, Nottingham Playhouse). The event this spring will be a first look at excerpts from the play, followed by a panel discussion with the director, writer and cast, with special guest David Lean -one of the first footballers to blow the whistle on the abuse scandal.

There will also be other events that will appeal to theatre fans and industry creatives alike. An Evening with James Graham, hosted by Adam Penford, will give viewers to an insight into the career of the multi award-winning playwright and screenwriter. Born in Mansfield, James is an Associate Artist at Nottingham Playhouse and his play Bubble, premiered during the theatre’s Unlocked festival last autumn. He also wrote Quiz for ITV, which was one of the most-watched television programmes of 2020.

Many of the productions that were live streamed last autumn as part of Nottingham Playhouse’s Unlockedfestival will also be hitting screens in homes across the country once more, with shows being available to rent for five days. Ranging from drama to comedy, horror to romance and including wonderful dance and musical performances, the archive stands testament to the volume and variety of work supported by Nottingham Playhouse since the pandemic began.

Family show Jack and the Beanstalk will also be able to view once again, after delighting young families over Christmas.

All productions will be filmed in accordance with social distancing and following government guidelines for the safety of creatives and staff. Any live performances with in-person audiences will also be socially distanced and follow official guidance.

Tickets, further information on when booking will be available and details regarding accessible performances can be found at: nottinghamplayhouse.co.uk/whats-on/.