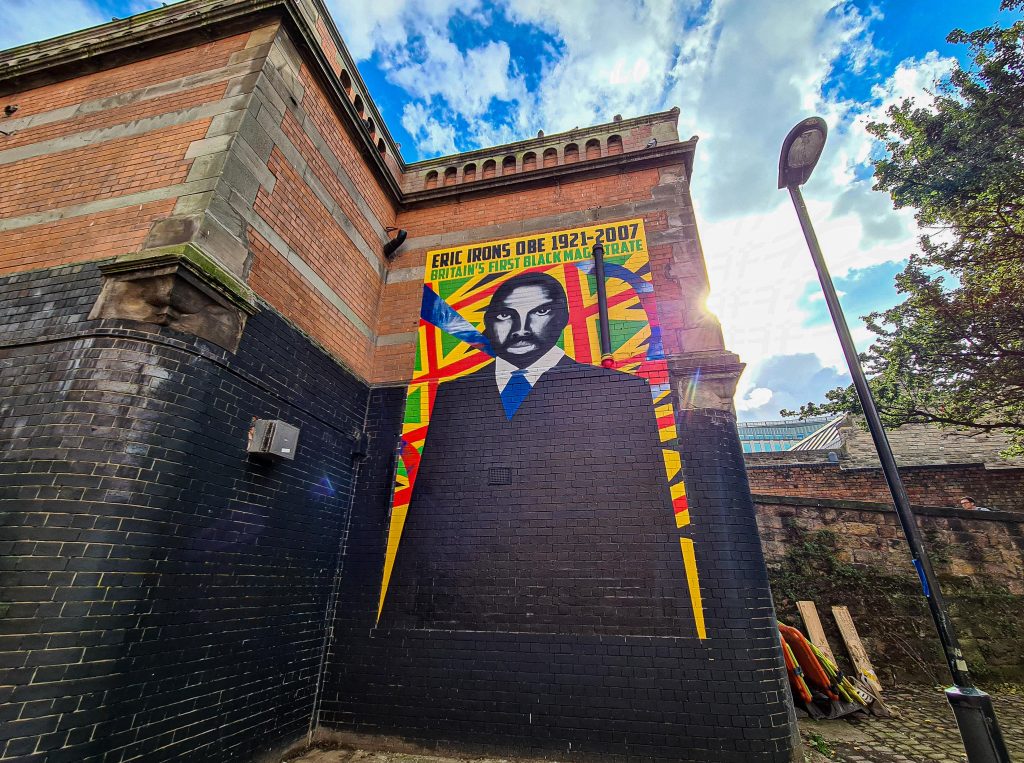 The latest mural from the Nottingham Street Art Project has been officially unveiled today, Monday 4 October. The artwork celebrates the life and achievements of Eric Irons OBE, who moved to Nottingham from Jamaica after WWII and would go on to become the first black magistrate in the UK.

Located along the Nottingham & Beeston Canal towpath, adjacent to Carrington Street bridge, the design was created by local artist Honey Williams. As well as depiction of Eric Irons OBE, the mural features a number of references to his life, including his Jamaican roots, his time as an RAF serviceman during WWII and the work he did for the black community in Nottingham having moved to the city in 1948.

Unveiled at the start of Black History Month, the mural was created to honour one of Nottingham’s leading rebels and pioneers, which is the ongoing theme of the street art project. A key figure in easing tensions during the 1958 race riots in Nottingham, Eric Irons OBE also campaigned tirelessly to scrap an embargo on hiring black bus drivers and transport workers.

“The family are delighted by this recognition of our father by the City of Nottingham. It is a unique, creative acknowledgement and we hope the public enjoy the mural as well as being more informed about our father’s significant contribution to racial and social justice.”

“Eric Irons OBE is perhaps the ultimate example of Nottingham’s rebellious and pioneering spirit. Having made Nottingham his home he worked tirelessly for the good of the people of our city, helping to pave the way for future generations, and so we are delighted to have had the opportunity to create this mural in his honour.

“The street art project is already proving to be popular with local residents and we hope this latest mural increases interest even further. We’d like to say a big thank you to the Canal & River Trust who have funded this mural, as well as the building owners for allowing us to create it on their property and also Nottingham City Council for their ongoing support of the project.”

“We’re delighted to be supporting this exciting project which will transform the canalside, bringing colour to drab corners and celebrating some of the city’s most inspiring characters – starting with Eric Irons.

“We first suggested the idea after seeing the impact of our street art project in Leicester. It’s fantastic how The Nottingham Project have developed the idea and broadened it out to the whole of the city and we’re thrilled to be working with such a creative and specialist organisation.

“We hope the pieces will inspire more people to explore the canal and feel the health and wellbeing benefits of spending time by water.”

“The Street Art project is a great way to showcase local artists and celebrate our city including pioneers like Eric Irons. He played such an important role in furthering the cause of equality and social justice in Nottingham, it’s entirely fitting that we are honouring him by unveiling the mural”

Work on further murals in the city centre is due to start in the coming weeks, further information visit thenottinghamstreetartproject.co.uk or follow The Nottingham Project on social media channels.