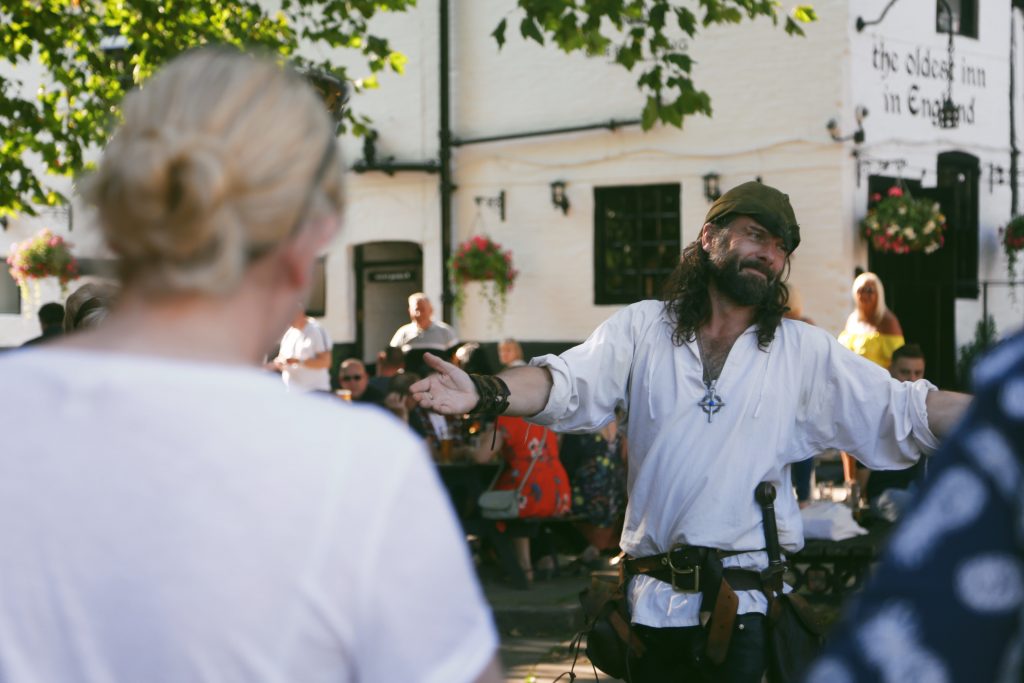 Nottingham and Nottinghamshire are full of surprises, where you can follow in the footsteps of Robin Hood, explore iconic landmarks that inspire film and literature and stop for a drink in the oldest inn in England.

With its award-winning green public transport system, 1,000 years of history, and vibrant music and arts scene, it’s no wonder that Nottingham has started to win plaudits and get the recognition it rightfully deserves. Hockley was recently named by The Times as one of the coolest 10 postcodes to move to in 2022 outside of London, and Nottinghamshire was rated by National Geographic Traveller as one of the top 35 destinations globally to visit!

Nottinghamshire is full of amazing things to do and has surprises hidden around every corner. With so many choices and options, sometimes it can be difficult to decide where to go and how best to make the most of your time in Robin Hood Country.

Thankfully, the Visit Nottinghamshire Team have pulled together a list of some of the best reviews and attractions in Notts, as ranked by Trip Advisor, to help you plan your visit and enjoy all that this historic destination nestled in the heart of England has to offer.

Here you’ll find some of Nottinghamshire’s most well known venues, as well as some of the region’s best ‘hidden gems’ as rated by the Great British public on Trip Advisor last year:

With a perfect 5/5 rating from over 500 reviews, Ezekial Bone’s Robin Hood Town Tour takes you through some of Nottingham’s most iconic spots and highlights the importance of the hooded man for the 21st century. A particularly sparkling review said “The highlight of our weekend in Nottingham. Interesting, educational and beer-drinking all at the same time. What’s not to like.”

With over 4,000 reviews averaging 4.5/5 on Trip Advisor this spectacular Elizabethan mansion and deer park set in the beautiful suburbs of Nottingham is a must visit for anyone coming to Notts. The hall featured as Wayne Manor in The Dark Knight Rises Batman film with one impressed visitor commenting “I will visit again for sure it was 100% worth the trip. And made a Batman fan very happy.”

Over 600 people have given the Newark Air Museum an average rating of 4.5/5 making it one of the top rated attractions in the region and a must do for aviation enthusiasts and history buffs alike! One happy visitor left this comment “What a shame we only had two hours as you could easily lose a day here with the great selection of aircraft … I have never seen our thirteen year old son so engaged (with something that does not plug in) … An absolute gem and well worth a visit.”

Famous for previously being Nottingham’s County Gaol and ‘hosting’ the legendary Robin Hood until his daring escape, 1,700 people have given the National Justice Museum an average rating of 4.5/5. Visitors often comment on the experts and actors at the museum! “Brilliant museum. Great for adults and children. The actors/historians are amazing. The judge/executioner yesterday should get a movie deal!”

Forming part of the historic Sherwood Forest, Sherwood Pines is one of Nottinghamshire’s best rated visitor attractions on Trip Advisor and one of the largest forests in the entire Midlands. Over 800 people rated the forest as 4.5/5. Visitors praise the sites “Excellent facilities” which are described as “clean and well maintained, great access to all the forest has to offer including cycle routes to suit all abilities”

Nearly 1,000 people have given the Theatre Royal a 4.5/5 rating on Trip Advisor! Situated in the centre of Nottingham, Theatre Royal is the beating heart of the city’s vibrant culture and arts scene. One pleased visitor to Nottingham commented “We love this venue as the UK’s premium go to concert hall to rival bigger UK venues.”

Nottingham has a proud sporting heritage and some of the best sporting atmospheres found in the UK. A big part of this Nottingham’s iconic and highly rated Trent Bridge with over 230 people giving the venue a 4.5/5 rating! We’re not surprised to read reviews like this “There can be few cricket grounds anywhere in the world that look as good as Trent Bridge. I have been coming to the ground for over 40 years and have enjoyed every visit.”

Getting an impressive 4.5/5 from over 800 reviews, Creswell Crags in North Nottinghamshire offers a glimpse into life in the last ice age between 50,000 – 100,000 years ago. One of many impressed visitors commented “We would all highly recommend a visit to Creswell Crags. We only wish we had arrived earlier to explore the outside area and grounds! We will definitely be going back soon.”

Newark Castle has stood proudly on the banks of the River Trent for 900 years and features a number of beautiful formal gardens. Much of the original castle was destroyed toward the end of the English Civil war but the attraction still receives 4.5/5 from over 600 reviews on Trip Advisor! Described as “well worth visiting and exploring all the nooks and crannies within.”

Nearly 550 people have given White Post Farm an average rating of 4.5/5 making it one of Nottinghamshire’s best rated attractions! One of the East Midlands’ favourite family tourist attractions, with many great reviews “Lots to see and do, plenty of animals to feed all very well kept. Good children’s play areas too. Entry price is a bargain.”

Nottingham’s Green Flag award-winning Arboretum is highly rated by visitors with over 300 people giving it a rating of 4.5/5. An amazing green space at the heart of Nottingham with visitors loving how peaceful this green oasis is “The vibes here are amazing, it’s so peaceful and quiet, very serene. I had a picnic here with friends and thoroughly enjoyed it.”

Adrenalin Jungle is one of Nottingham’s most highly rated attractions, receiving a perfect 5/5 from 224 people! With paintballing, mud buggies, assault courses and more, Adrenalin Jungle is a must for those who like to live a little closer to the edge. “Would recommend to anyone and we can’t wait to go back!!”

With over 200 people giving the museum a rating of 4.5/5, the Nottingham Industrial Museum is a must if you’re interested in getting an insight into Nottingham’s industrial past, with visitors describing it as an “Amazing Hidden Gem” and “Fantastic value for money and fabulous staff”

Green’s Windmill has received over 300 reviews and has been rated 4.5/5. The Windmill is a working mill and popular museum with a science centre. One reviewer said “A brilliant place to spend an afternoon. … The views from the top are wonderful, and I feel like we learned loads; so fascinating to see this machine/building from the inside.”

Over 1,000 people have rated The Workhouse located in Southwell as 4.5/5! Built in 1824, The Workhouse is the most complete remaining workhouse in existence. The well maintained exhibitions attract glowing reviews “This is a very interesting piece of English history that has been preserved superbly.”