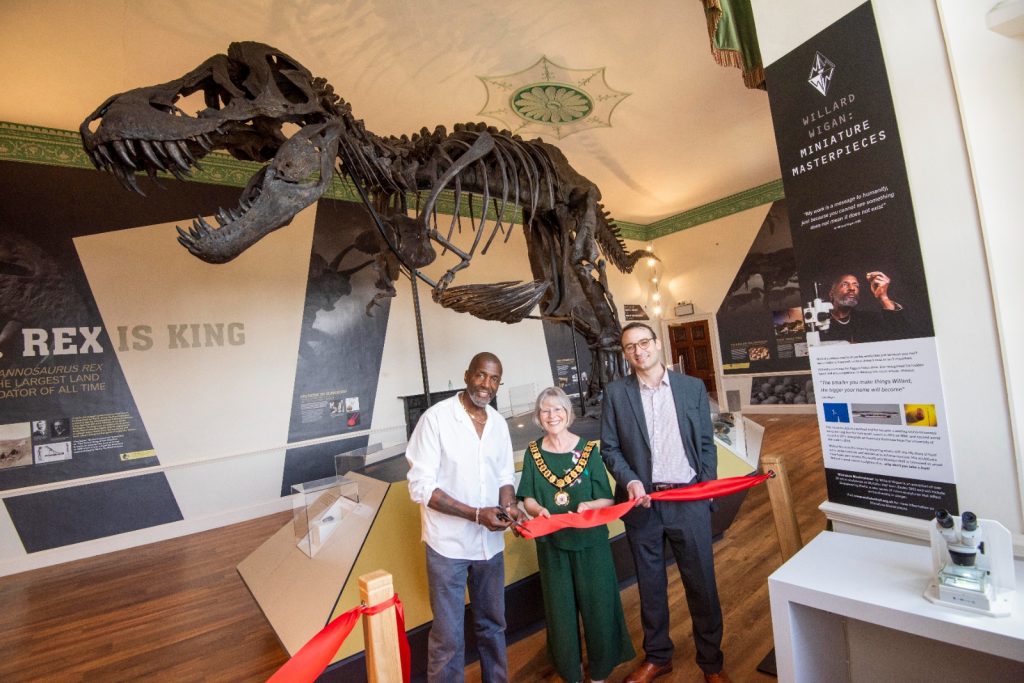 To mark the first-year anniversary of the opening of Titus: T. rex is King exhibition, visitors will get to see an astounding new addition to this world-exclusive event.

Internationally-renowned micro-sculpturist, Dr Willard Wigan MBE, has created and installed a new extraordinary micro-sculpture of a perfectly formed T. rex, measuring just 0.5mm which sits within the eye of a needle, for the coming months.

Now the very tiniest micro-depiction, and, Titus, the first real Tyrannosaurus rex to be exhibited in England for over a century, stand side by side. Titus the T. rex, demonstrates the immense power and impact of this king of the dinosaurs, while Willard Wigan’s creation presents the smallest, but no less powerful. 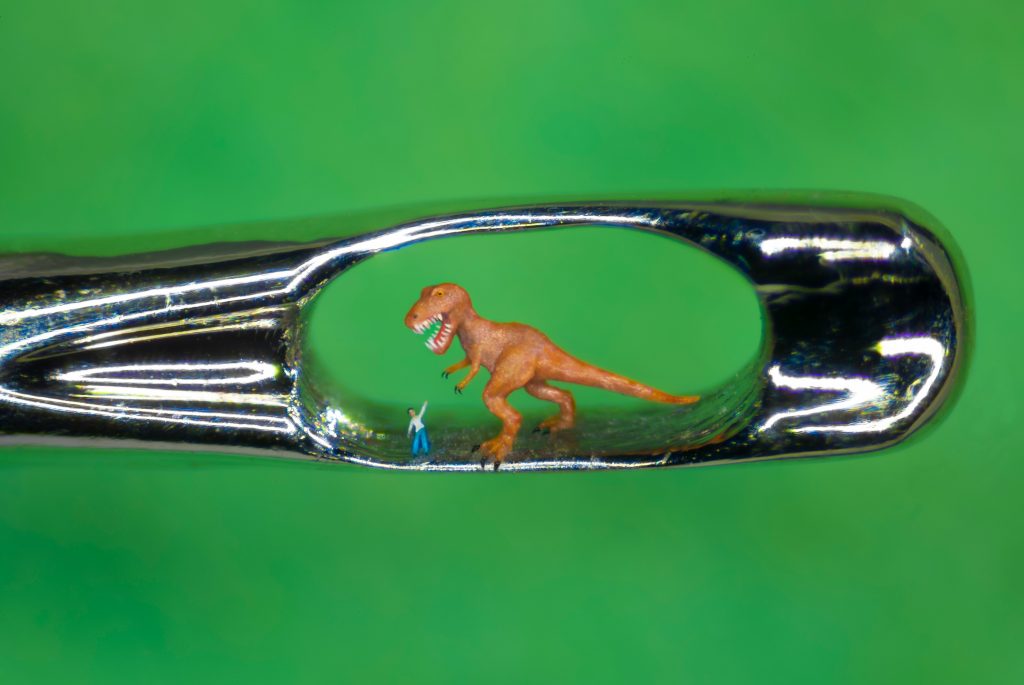 The installation from Dr Willard Wigan is so small you can only see it under a microscope.

Dr. Willard Wigan MBE said: “It is a real honour to be exhibiting one of my sculptures alongside the breath-taking Titus T. rex exhibition. Wollaton Hall Natural History Museum is renowned for being home to rare specimens from across the globe, including Titus himself, which made it the perfect home for my T. rex sculpture.”

Through his work, Willard is sending a message to humanity – just because you cannot see something does not mean that it does not exist. He added by placing his micro-sculpture alongside a real-life T. rex, it allows his message to be elevated.

Nottingham City Council’s Lord Mayor, Councillor Wendy Smith, said: “I was thrilled to meet Willard Wigan, and unveil the micro-sculpture of a T. rex to make it accessible to visitors. It was wonderful to see the T. rex installation in place for the first time at Wollaton Hall and hope that it will excite and educate visitors of all ages to Nottinghamshire.”

Nottingham City Council’s Portfolio Holder for Leisure, Culture and Planning, Cllr Pavlos Kotsonis, said: “It’s fantastic that our Nottingham City Museums team has worked with Willard Wigan to bring the T. rex sculpture ‘in the eye of a needle’ to Wollaton Hall and to hear about his ideas for the upcoming exhibition in 2023, which we hope will create interest in natural science and culture in young people. We look forward to welcoming visitors to Wollaton Hall, especially children and families that may be inspired by this micro-sculpture.”

Titus the T.rex Exhibition opened in July 2021, to international acclaim. Over 70,000 visitors have already met Titus and engaged with the bespoke interactive exhibition designed around him. 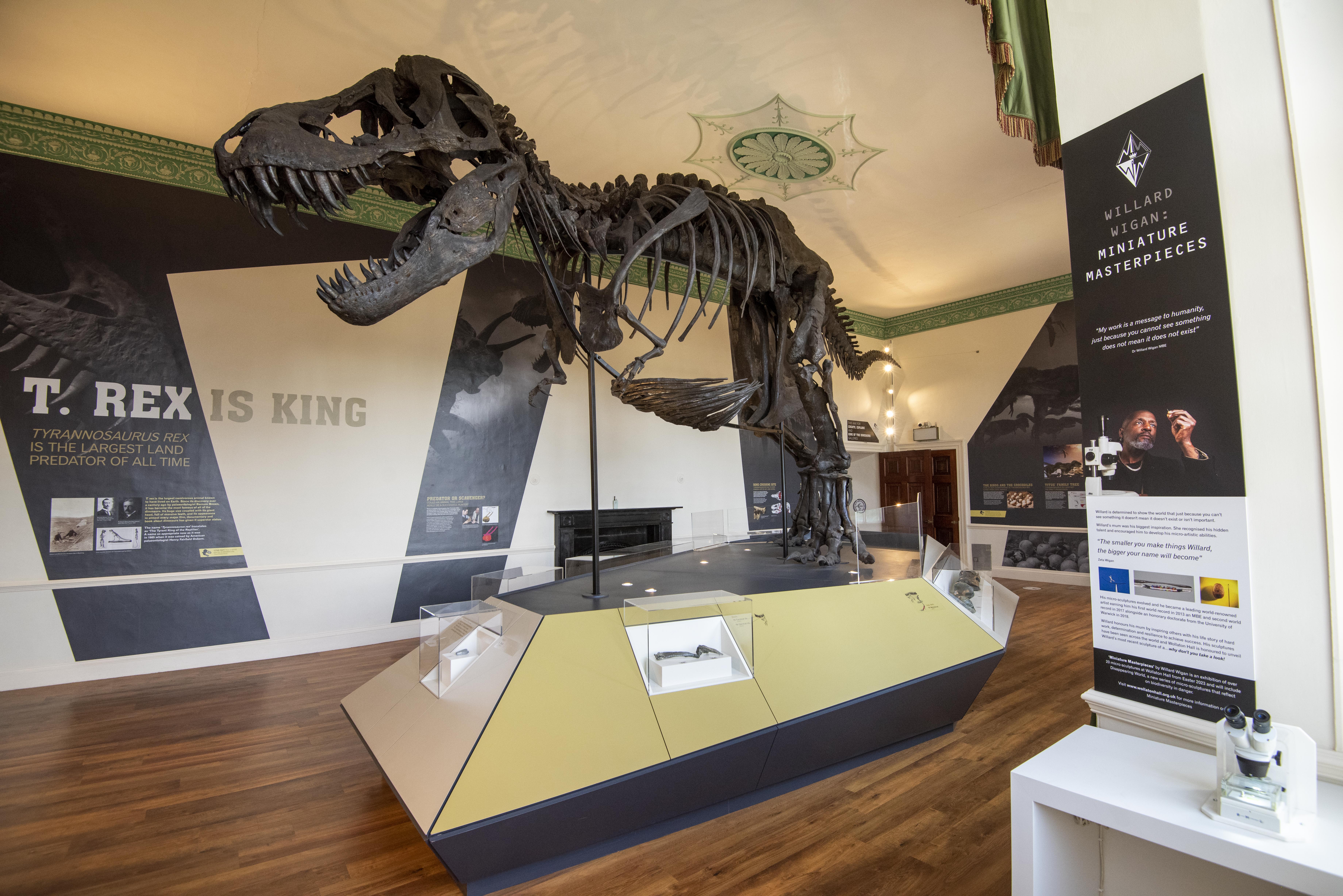 Rachael Evans is Museums Development Manager at Nottingham City Museums and Galleries at Wollaton Hall, one of the UK’s most important Natural History Museums: “It is an astonishing moment for us. We will have one the largest dinosaurs ever exhibited in the UK on display alongside one of the smallest. The T. rex that has been introduced to the exhibition is 0.5mm in size, with miniscule teeth made from glass. Since new information about the T. rex has been researched and made available, Willard has remodelled the sculpture to be as accurate as possible in his depiction. We can’t wait to see our visitors’ reaction to this new addition.”

Wollaton Hall has an international reputation for attracting rare and previously-unseen dinosaur exhibits to the UK. In 2017, it staged the hugely successful Dinosaurs Of China exhibition with a selection of fossils and skeletons from the Institute of Vertebrate Palaeontology and Palaeoanthropology in Beijing and the Long Hao Institute of Geology and Palaeontology Inner Mongolia, that had never been seen outside of Asia before.