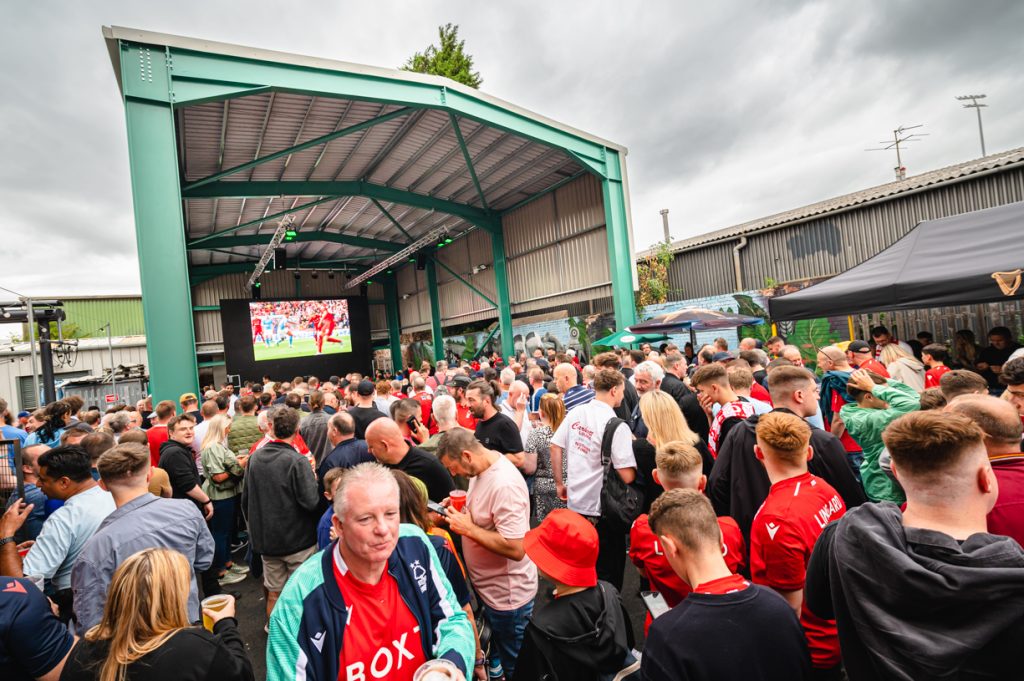 The Trent Navigation Inn on Meadow Lane has constructed an enormous new event space right next to the pub. The Big Shed boasts the biggest outdoor TV screen in the Midlands, standing capacity of up to 500 people and a dedicated bar stocking draught beers from the award winning Navigation Brewery, literally a stone’s throw away.

The TV screen is one of the most impressive features – at a whopping 15m², it’s the biggest, permanent outdoor screen in the Midlands. It can be viewed in all weather conditions including direct sunlight and the HDR screen is 12 times as bright as the average domestic TV. The Nav has earned a reputation as one of the best places to watch live sport in Nottingham – it’s close to the city’s major football and cricket grounds and always has a welcoming atmosphere. For the Euros in 2020 and more recently Nottingham Forest’s play-off win they repurposed their car park to create a temporary fanzone which was the hottest ticket in town to watch the game, selling out 12 hours after the tickets were released. That same car park is now the site of the new outdoor venue.

It’s not all about live sport though, the venue has big plans for The Big Shed, the pub’s General Manager Sam Ditchfield said “We are planning a diverse range of events throughout the year including live music, comedy, street food, films and markets. There’s nothing quite like it in Nottingham at the moment – the combination of the huge screen with award winning beer on tap and freshly prepared food, all protected from the British weather. We can hook anything up to it so DJ’s and musicians can synchronise visuals or we can even host an old school Street Fighter tournament on a Playstation but the characters will be life sized!”