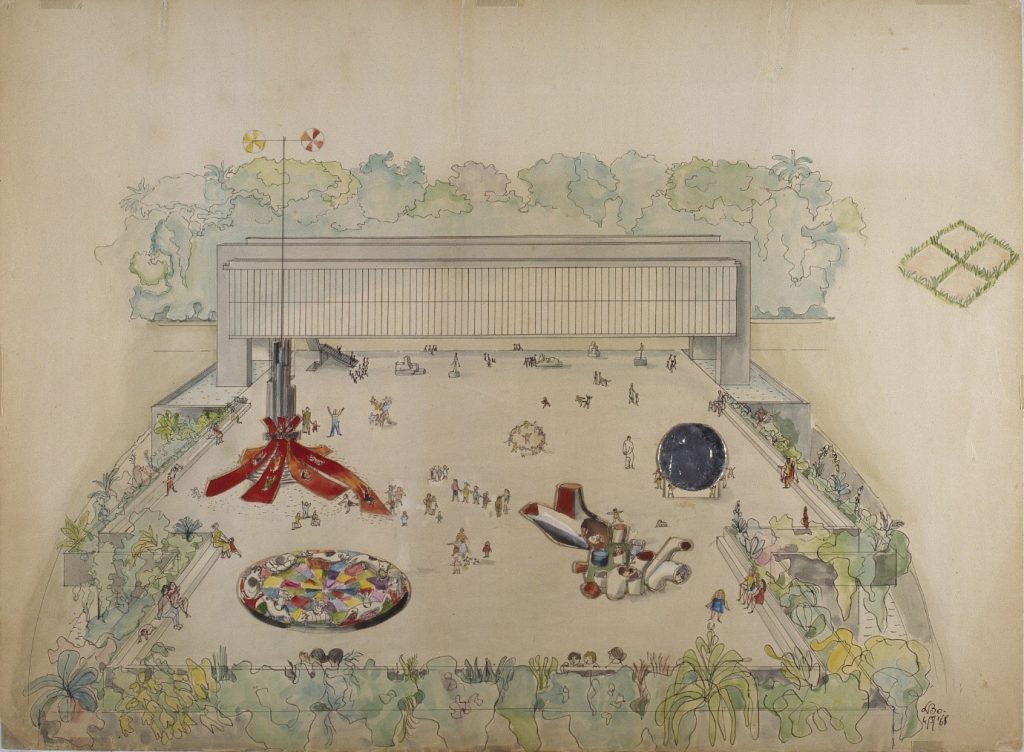 Assemble + Schools of Tomorrow | Meriem Bennani: Life on the CAPS

Nottingham Contemporary is pleased to announce an exhibition in collaboration with Turner Prize-winning design collective Assemble and local children, inspired by the modernist architect Lina Bo Bardi, and a solo exhibition by Meriem Bennani.

More than three years in the making, Nottingham Contemporary will present a major collaboration with the design collective Assemble in summer 2022. This ambitious project brings to life the Italian-Brazilian architect Lina Bo Bardi’s unrealised vision for a fantastical playground, through a series of three large-scale play sculptures, one of which was developed in dialogue with children from three local schools.

In 1968, Bo Bardi produced an evocative illustration of her design for the Museum of Art, São Paulo (MASP). Situated on a public plaza in front of the iconic museum, play structures are drawn at a vast scale – as though imagined by children, rather than an architect. This was important for Bo Bardi, who wrote: “the young will be the protagonists in the life of the museum through design, music and theatre”.

Bo Bardi’s utopian play-space was, however, never built. Drawn in the midst of the Brazilian dictatorship, this unrealized playground might be read as a way of exploring civic life under military rule, and the power of young imaginations in making alternative worlds. Today, her design prompts the questions: how might education and art galleries be rethought? What is the relationship between play and learning? And can play be a political act?

This exhibition reimagines Bo Bardi’s vision across two galleries at Nottingham Contemporary, with two large-scale play sculptures directly inspired by her now-famous drawing and a third designed in collaboration with children from local schools, as part of Nottingham Contemporary “Schools of Tomorrow” programme (generously supported by Paul Hamlyn Foundation). At each school, Assemble worked closely with a resident artist and children to explore themes around play. Children’s actions, ideas and responses were at the heart of this conversation; Assemble has created a design for and by the city’s children. At a moment when most playgrounds appear to be designed for the kinds of play that adults like to see children do, this project challenges the confines of the gallery space and its uses. It seeks to open up new ways of being in the museum, for children and adults alike.

This exhibition represents a new direction for Nottingham Contemporary, having been collaboratively devised by our Learning and Exhibitions team, and developed and realised in conversation with families, school groups and young people within the “Schools of Tomorrow” programme.

This is an ambitious collaboration for Nottingham Contemporary and Assemble. Like the collective’s Brutalist Playground (2015–18), the project explores play at an ambitious scale, inviting new ways for people to occupy and take ownership of the gallery.

Meriem Bennani: Life on the CAPS

Nottingham Contemporary presents Life on the CAPS, the New York-based Moroccan artist Meriem Bennani’s largest solo exhibition in the UK to date. Bennani’s acclaimed eight-channel video installation Party on the CAPS (2018–19) will be shown for the first time in the UK, alongside its newly commissioned sequel.

This exhibition brings together the first two episodes of a speculative documentary trilogy, which blends absurdist narratives and futuristic forms with political critique. Bennani’s work experiments with innovative forms of expression and storytelling, employing a playful visual language through which reality is amplified by special effects, digital animation and humour. She draws on the aesthetic and narrative conventions of reality television, documentary, advertising, social media and phone footage – questioning both the dominance of digital technologies and the fracturing of identities within contemporary society.

The first episode of the trilogy, Party on the CAPS, captures an experience of dispossession and resilience in a speculative future world. The film depicts the inhabitants of a fictional island in the middle of the Atlantic called the CAPS, where refugees and immigrants ‘illegally’ teleporting across oceans and borders are held by the state. Over three generations, what started as an internment camp on the island has developed into a bustling, geographically isolated megalopolis.

The second episode of the trilogy, Life on the CAPS (2022), is a co-commission with The Renaissance Society, Chicago, where it will have its inaugural presentation (26 February – 17 April 2022) before its European premiere at Nottingham Contemporary. This episode – a collaboration with the music producer Fatima Al Qadiri – expands on the world of the CAPS and Bennani’s exploration of displacement and biotechnology. Themes of privacy, protest and public gathering emerge, with Bennani offering joy and humour as forms of resistance. Once again shot in Morocco, Bennani will blend original footage with animation, visual effects, music and dance to explore a range of global pop culture references and North African traditions and aesthetics. The final outcome will be a single-channel moving image work presented in a black box space – it will be Bennani’s most ambitious work to date.