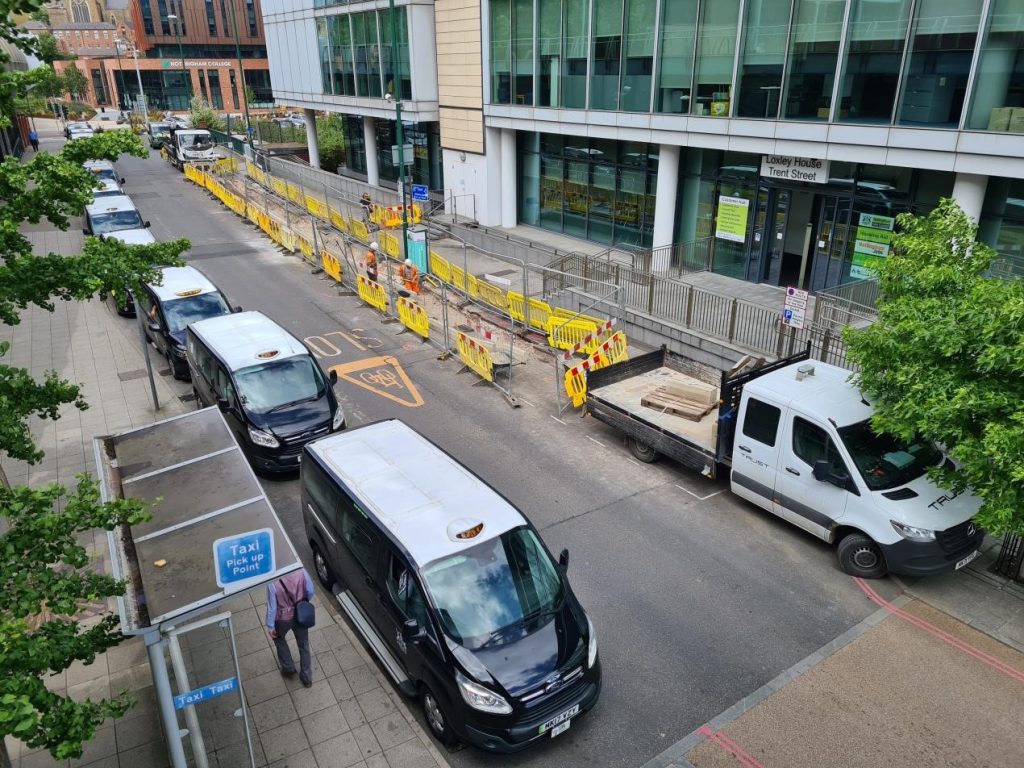 Work is underway in Nottingham on a trailblazing scheme to allow electric taxis to charge up wirelessly while they wait for passengers.

The City Council secured £930,000 from the Government’s Office for Zero Emission Vehicles through Innovate UK for the Wireless Charging for Electric Taxis (WiCET) project. This is a UK first involving both London Electric Vehicle Company (LEVC) and Nissan Dynamo electric taxis, placing Nottingham at the forefront of green technology innovation.

Nottingham, a city with ambitions to become carbon neutral by 2028, is already at the forefront of the green revolution, with a fleet of hackney cabs which includes 54 electric taxis – the largest number operating outside London. The City Council has used Government funding to install dedicated electric taxi rapid charge point infrastructure near taxi ranks, alongside almost 300 publicly accessible sockets across the city.

The work on Trent Street close to Nottingham Station will see five wireless charging pads installed into the road, allowing local taxi drivers taking part in the trial to charge electric vehicles without any cables while they queue in one of the busiest taxi ranks in the city. Drivers will simply drive over the charging equipment, start their charge, and drive away once they have passengers.

Five LEVC and four Nissan Dynamo electric taxis have been fitted with wireless charging systems. These vehicles will be loaned to drivers for the trial to provide insight and learning into how the technology can be developed for the future. The council will also be able to understand the effectiveness of wireless charging for its own fleet charging needs.

Construction and testing will be ready for the trial to get underway in August.

“Nottingham is once again at the forefront of efforts towards a carbon neutral, clean air future.

“This pioneering scheme, at no cost to the council or local taxpayers, could be a real gamechanger in electric vehicle charging and we’ll be keen to find out from cabbies how it’s going and how we might apply wireless charging in the future.”

“We’re excited to see the works begin to install the five wireless charging pads as part of the WiCET project.

“This marks a key milestone in demonstrating real-world wireless charging and making the transition to electric taxis easier for drivers in the future.”